Posted on March 7, 2016 by Interfanatic under Cars 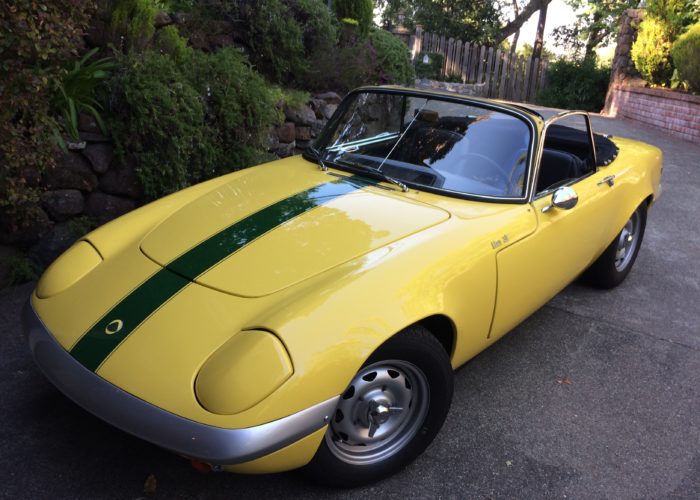 According to factory build records, Lotus Elan S/E No. 45/7145 left the factory on May 30, 1967, for delivery to British Motor Car Distributors, one of the export dealer for Lotus cars at the time. The car was delivered with, and remains powered by, Lotus/Ford Twincam No. LP8015LBA. The engine has an “LA” block, so stamped when the casting process left the cylinder walls of sufficient thickness to be safely overbored.

1967 was the last year that the Elan was produced for export to the United States with Weber carburetors, knock-on wheel spinners, and toggle switches on the dash. The S/E model of that year is considered among the most desirable from the entire production history of the Elan, which spanned from 1962-1974.Elan S/E No. 45/7145 appears to have been used for road and track during its early history. When it was acquired in 1990 by the present owner, Chris Locke, it was fitted with a roll bar, header and four-point harnesses, and was partially disassembled and in storage at Sears Point International Raceway. The car had last been registered for street use in 1983.

A multi-year restoration process was undertaken, attempting to strike a balance between originality and restrained enhancement. The engine was balanced, enlarged from 1558 to 1594 cc, Hepolite pistons installed, the head ported and polished, and Sprint valves fitted. Original spec Webers were retained, but the S/E cams were replaced with a slightly hotter grind. The stainless steel exhaust includes a tuned header, 2 inch tubing, and a custom made Bassani muffler. The engine produces 145 horsepower at 7000 rpm, up about 25 percent from a stock Elan S/E – which itself has output about 10 percent greater than a non-S/E Elan.

The chassis and many of the suspension bits were replaced in the restoration process, all to original spec except that the chassis is galvanized. The springs and dampers were modernized somewhat, with adjustable Spax shocks at all four corners and slightly higher rate springs – 115 lbs/inch at the front, and 95 lbs/inch at the rear. 175/60-13 Yokohama 031R tires complete the package for handling that is quick, communicative and predictable. Fitting tires larger than 155/70-13 on a Series 3 Elan required some flaring of the fender wells, but this seemed sensible since there is no longer much of a selection of performance tires in these smaller sizes. The flares on No. 45/7145 were blended with the original bodywork as subtly as possible.

The interior was also restored and upgraded. Although the gauges are original, the dash was badly cracked and the vinyl upholstery deteriorated. The dash was replaced with an original spec layout, but in Rosewood, which provides more interesting grain patterns than walnut. The seats, console, and door panels were re-upholstered in leather, and a cloth top was fitted.

Much of the mechanical restoration was performed by Elan specialist Rich Kamp of Kampena Motors, while engine development was by Dave Vegher, Veloce Motors West.