Posted on March 4, 2010 by Interfanatic under Updates

Arriving in Algarve, you cannot help but be struck by the rugged landscape and beautiful beaches. It was my first time in the region, and for most of the competitors, the first time driving at the new Autodromo Internacional Algarve. The approach to the circuit is itself impressive, with excellent access and facilities, and after a few reconnaissance laps, there was a clear consensus among the drivers that there were challenges ahead.

The circuit includes an interesting and undulating series of 14 slow- and high-speed turns, most of them off-camber and blind, several reversing direction while cresting a rise, and a long front straight that begins each lap leads into a fast downhill right-hander followed by a hairpin and uphill cresting left-hander. Individually, some of the turns are reminiscent of those we know from famous circuits — Paddock Bend, the Corkscrew, Blanchimont, the Carousel and Canada Corner — but few circuits come to mind that offer this number of different and challenging combinations at the same venue. Not surprisingly, it took me considerably longer than usual to learn my way around during practice.

I was driving Clive Chapman’s ex-Jim Clark Lotus 32B Tasman, which proved well-suited for the circuit. Although somewhat less nimble through the corners than some of the 1.5 litre cars, the additional power provides good acceleration on the exiting the slower uphill corners. Qualifying was at sunrise on Saturday — or actually, a bit before sunrise. Perhaps it was the caffeine from two cups of coffee, but I began to feel the flow of the circuit and keep my foot down through the blind corners — made blinder still by the early morning light — and was pleasantly surprised to qualify third, behind Alan Baillie. Jason Minshaw took pole by a considerable gap, but unfortunately, gearbox problems ended his weekend. Mechanical problems also sidelined Alan Baillie and Sid Hoole in Saturday’s race, but I was feeling increasingly comfortable with the circuit and the 32B was performing well, taking me to a first place finish, followed by Nick Eden and Charles McCabe.

Sunday’s race was a different story. Near the beginning of the formation lap, my gear change linkage came loose. I limped the rest of the way around the circuit and coasted to the front of the grid, where Classic Team Lotus hastily diagnosed the problem and effected a repair, just as the flag dropped. I rounded the circuit on the outlap, gingerly selecting gears and not knowing whether I would have first for the start or whether the fix would hold. I breathed a sigh of relief as the car launched properly after the lights went out, and everything appeared in order as I changed up through the gears. Charles was on my tail, however, and I knew Sid was back in action and would be moving up through field, so I put aside gearbox concerns and focused on maintaining the lead. It was one of the most enjoyable races I have ever driven, and although Sid’s car was filling my mirrors on the final corner and the circuit was quite greasy, I was able to stay just ahead through the finish.

The podium ceremony was fantastic for Sid, Charles and me, and the banquet at the Casino that night was spectacular. I was both surprised and very pleased to receive the Driver of the Day award, and to learn from Clive that this was the first time the 32B has been driven to a first place finish in historic racing. The entire weekend was extraordinary, and for me, one of the high points of the season.

Driving the ex-Jim Clark 32B has also been an extraordinary experience for me. Growing up in the United States in the 1960s, I had a passion for racing, sports cars and all things motorsport, and was enthralled with the technical innovation, and the skill and demeanor the teams and drivers of the day – especially Team Lotus and Jim Clark. What really sealed the deal was when, at age 12, I saw the Indianapolis-winning Lotus 38 on display at the Ford Pavilion during a visit to the New York World’s Fair. My interest in sports cars and racing continued, but college, law school, and a career as a federal prosecutor followed by private law practice sidelined my pursuit of race car driving for many years.

Finally, when I had an opportunity to acquire a 1967 Elan and a competition license in my mid-30s, I stepped onto the slippery slope. I acquired his first purpose-built historic race car – a 1965 Lotus 23B sports racer – a short time later, followed by a 1963 Lotus 27 Formula Junior and an ex-Mario Andretti 1976 Lotus 77. More recently, have been entrusted to drive the ex-Jim Clark 1965 Tasman Championship Lotus 32B from Clive’s collection. I am enormously grateful for the opportunity to live my dream of driving a car once driven by Jim Clark, a hero of my youth, and for the camaraderie and great friendships that I have enjoyed in pursuing my passion for historic racing. 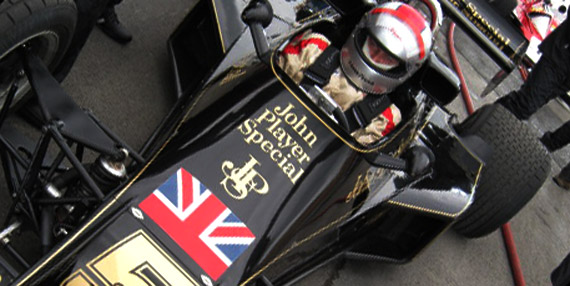